Hold the Line, against new and different games produced by girls … who are not sufficiently buxom and supportive of your awesome manliness!

Be Brave, good gamer soldiers … and continue your anonymous attacks against these upstart good-for-nothing girls!

In a way, it really does seem to come to that. The #GamerGate phenomenon would be entertaining for all of a few seconds, much like we stare at someone we think is attempting spontaneous and nearly-insane comedy right before we realize, to our horror, that we are about to laugh at a spastic disability. In truth, the phenomenon would not even be a one-hit wonder except for a spectacular nexus of bigotry and juvenilia.

Mark Fiore’s moving (ha!) editorial might sound like open satire, but such an assessment would be somewhat insulting, as it would suggest the artist required some sort of herculean labor to simply run down the checklist of hashtag-GamerGate.

Online, we are supposed to call it Poe’s Law, which is an alpha geek’s attempt to claim originality for pointing out that truth is necessarily stranger than fiction. However, we ought not knock Poe’s Law, because the internet age does raise, by orders of magnitude, the frequency with which the question arises whether we are viewing the real thing or a vicious satire. Evangelical Christianity, the Republican Party, Fall Out Boy, and now #GamerGate.

END_OF_DOCUMENT_TOKEN_TO_BE_REPLACED 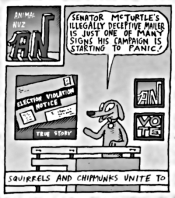 Eric Lewis certainly shows confidence, titling his latest installment of Animal News (#223), “Buh-Bye Mitch Edition”. And whatever we might believe about the polling, the averages, the aggregators, the modelers, year-six elections, or Senate Minority Leader Mitch McConnell’s advantage in the numbers heading into election day, it really does seem as if the incumbent’s campaign senses greater insecurity in those numbers; of all the close races leading toward what is predicted to be a Republican triumph, the senior senator from Kentucky has one of the most visible advantages.

Then again, he did fall back to trying to cover his Social Security gaffe with an astoundingly innovatinve campaign argument: “I’m not announcing what the agenda would be in advance.” Far be it for us to pretend to be any arbiter of all things, but something seems amiss about that formulation.

And that would have been what it was, except, well, Lewis has a point with is sensational “headline”:

Senator McTurtle’s illeglally deceptive mailer is just one of many signs his campaign is starting to panic.”