Say what you will about the psychopathology of everyday life†, but these are Republicans, after all. Or, more accurately, this is Rep. Paul Ryan. You know, the alleged conservative policy wonk who needs to be taken seriously on budgetary issues? The guy who ran as the GOP’s vice presidential candidate last year?

“Congressional Republican leaders are now saying they won’t even talk to the president unless Obama agrees—before any meetings even take place—to give them what they want.”

Is anyone really surprised that it comes to this?

No, really. How is it not the expected outcome?

For all the pundits who complain bitterly that Obama hasn’t done enough to schmooze with lawmakers, doesn’t an anecdote like this suggest the problem is not entirely the president’s fault? Are we to believe that all five—invited in secret so they wouldn’t have to take heat from Fox or the GOP base—were all washing their hair that night? 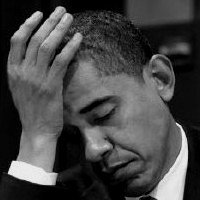 On a more substantive note, the piece also included this key piece of information:

What spurred Mr. Obama to reach out to rank-and-file Republicans with a flurry of phone calls, meals and now Capitol visits were the recent announcements by their leaders—Speaker John A. Boehner and Senator Mitch McConnell of Kentucky—that they will no longer negotiate with Mr. Obama on budget policy as long as he keeps demanding more tax revenues as the condition for Democrats’ support of reduced spending on Medicare and other entitlement programs.

This is important. Congressional Republican leaders are now saying they won’t even talk to the president unless Obama agrees—before any meetings even take place—to give them what they want. In other words, when the White House announces that all efforts at deficit reduction in the coming years will include literally nothing but 100% spending cuts, then GOP leaders will be prepared to negotiate with the president.

END_OF_DOCUMENT_TOKEN_TO_BE_REPLACED

The Yakima County sheriff’s office says a man mistook his pregnant wife for an intruder at their Terrace Heights home and shot her, leaving her in critical condition.

So let us go over this, just so we’re all clear on the issue: When people remind that one is more likely to shoot a household resident than stop a criminal with a gun, it isn’t a suggestion.